One of the things I most love about the Open Water world is the overwhelming, unequivocal, unambiguous dominance of women in the sport.

Sarah Thomas– holder of the world record for the longest open water swim, the longest lake swim and the longest current neutral swims on record. First person to conquer 4 widths of the English Channel.

On the topic of longest swims on record, the top 7 are women! There are only 8 men in the top 20.

Allison Streeter– Previous holder of the title of Queen of the Channel, which downplays the fact that she had 11 more crossings than the King of the Channel!

Chloe McCardell– the latest Queen of the Channel

Julie Ridge– the first person to complete a double Manhattan.

Stacey Chanin– the first person to complete a triple Manhattan

Mercedes Gleitz– the first person to complete the Strait of Gibralter.

Maria Sanchez– the first person to complete a double Strait of Gibralter.

And so many more- that was just the alphabetical order! https://longswims.com/first-swims/

It was September 2020, and I had just completed Jersey to France. As I learnt more about all of these women and learnt more about the pioneers of the sport; I knew that eventually, somehow, I wanted to have my name in that list.

And so I started trying to figure out just how I could get my name on that list. Could I be the fastest to do something? …Probably not. Could I have a record for doing something the most number of times? Maybe, but I’m starting relatively late in a swimming career and…. Let’s be honest, long swims are expensive.

Could I be the first to do something? Well, I thought that everything must have already been done, but I decided to go out researching anyway.

[The long swims database was absolutely invaluable for this. If you love swimming and you love data, please consider signing up as a member to support this fantastic resource.]

So I started looking local (again, money!). And the really difficult thing is, it’s tough to think of things that don’t exist. I tried to think of swimming versions of other challenges I knew of;

–          How about 3 lakes challenge? Like 3 peaks, swim the longest 3 lakes in the UK within a set time period. That could be fun! Nope, googled it and found someone already training for it.

–          How about all of the lakes in the lake district? There’s 16 lakes there, that would be a great challenge! Nope, googled it and found someone already raising money for charity for their attempt.

So I started looking further afield. How about the Channel Islands where I had done J2F the year prior?

I looked into the distance, 45km or 28 miles. Ok, that’s doable. Barely. Kind of. Sort of. Just. (Let’s not talk about how 23km is the longest I had ever swum before.)

I looked into the history; Adrian Sarchet had attempted it once, with Matt Clarke as a pilot. That was a good thing, and at the very same time a Bad Thing. I have swum with Matt, and I know he is an excellent pilot. And this obviously means that he is open to Guernsey swims. Great!!

On the other hand, Adrian Sarchet is a decorated Ocean’s Seven swimmer. He is a national hero on Guernsey. If he couldn’t do it, is it doable?! Well who knows. None of those women on my list set off on any of their swims knowing for sure if it was doable or not. 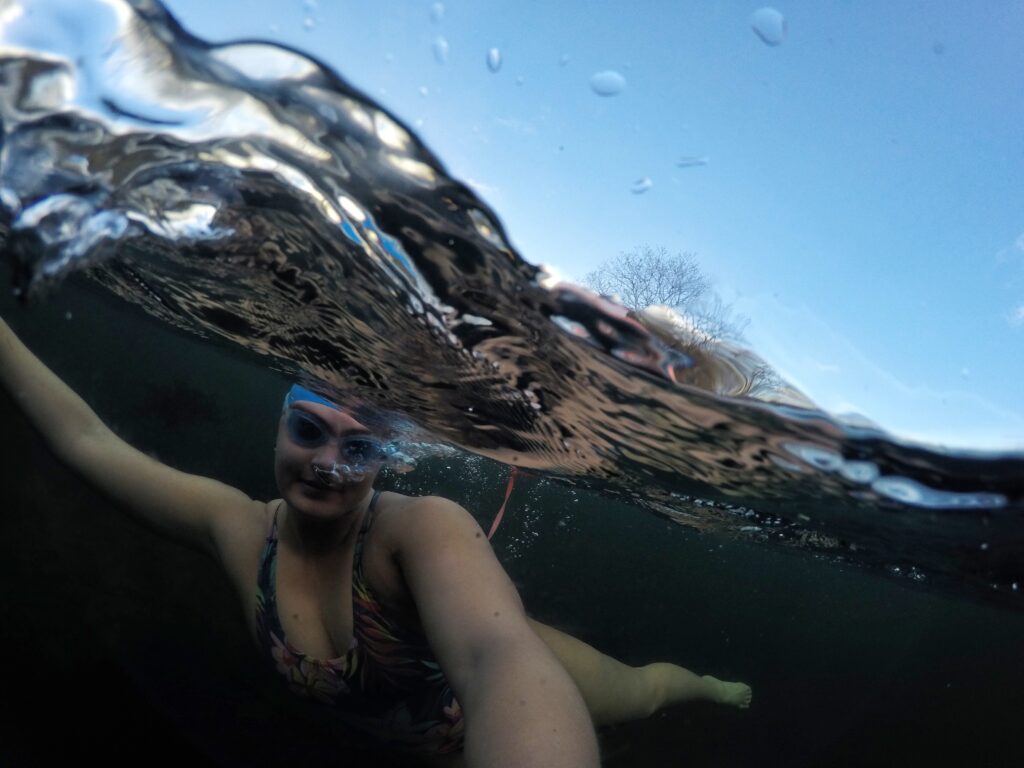 “If your dreams don’t scare you, they are not big enough.”

Next step was to contact Matt as a potential pilot. After speaking to him, it was revealed that there were already a couple of people attempting early firsts in 2021; it had become a race to be the first to swim from Guernsey to France.

This was the point where I first decided that I needed to keep the swim secret. There were already other people angling to be the first to complete G2F, and they had arrived at this goal themselves. The last thing I wanted to do was create more competition by inspiring more people to race me!

Then, finally, I put a deposit down for the slot. It was done. The race was on. Time to get training.

…..2 months later, with 5 months to go until my swim, the UK went into full lockdown for 3 months.