My 2021 English Channel attempt started on 16th September at 5:30am. My crew and I had arrived at Dover Marina at 4am to meet our pilots on board Optimist, and get ourselves settled and ready to go. My crew were very experienced with swims by this point- my mum and chief medical officer Jo had crewed both my 2020 Jersey to France swim and my 2021 Guernsey to France swim, and my partner and social media manager Will had crewed G2F and supported me on many of my longer training weekends. Boat packed, boxes on board and briefings given, Optimist cast off and motored out of Dover marina. 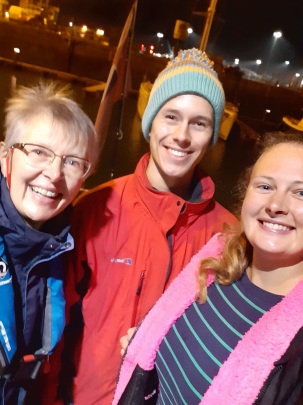 We made our way quickly around to Samphire Hoe, where we were slowly joined by a flotilla of other boats- Suva, Viking Princess II, Sea Leopard, Louise Jane, Masterpiece.

I felt very anxious getting ready and making my final preparations— I didn’t feel like I had been given the 10 min warning I had asked for, so by the time the engines stopped and we had arrived at the beach, I felt panicked and unprepared. I should have taken my time— it’s my swim after all!- but instead I rushed through my greasing and and forgot my pre-swim nutrition altogether. We (my team and I) don’t really know for sure what caused my stomach issues later on in the swim, but I think that this slip up was a big contributing factor.

My nutrition is very carefully designed to provide me with a certain amount of easily digestible carbohydrates per hour, to replace and replenish glycogen stores in the blood and muscles. Any more and your body is not able to absorb it: your body will simply expell it, causing extra work for your digestive system. Any less and you risk going into glycogen depletion, where your anerobic system is taking glycogen from your stores at a faster rate than you can replace it. By starting out with less carbohydrate already in my system, I was starting my swim an 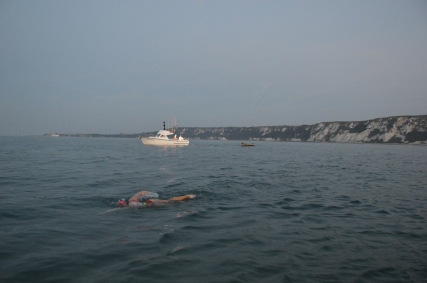 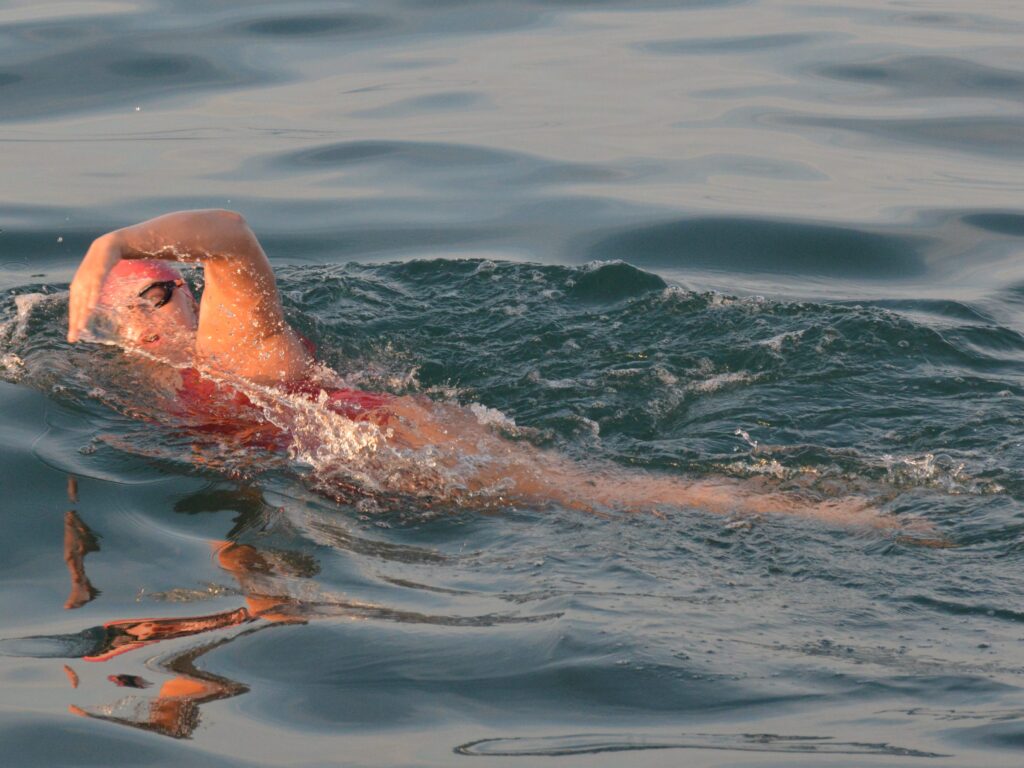 The first couple of hours passed pretty uneventfully. Some boats with faster swimmers made their way off towards the horizon, I managed to start leaving some boats behind, Suva and Louise Jane stayed stuck on our port and starboard sides respectively.

At around hour 3-3.5, things started to go downhill. I could feel myself getting tired- not “I appear to be swimming the channel and that’s quite difficult I guess” tired, but serious, sleepy, struggling to keep my eyes open tired. I asked my crew for extra caffeine in my next feed, and for a little while that seemed to do the trick.

For those faint of heart or constitution, I recommend skipping the next paragraph. I’ll try and keep the gory details to one contained area.

At about 4 hours, I realized I needed a poo. This is fairly normal for me, and as any long-distance swimmer knows; when you gotta go, you just gotta go. So I warned my crew, stopped, pulled my costume aside and went about my business. Very quickly, I realized something was wrong. I felt like I was shitting out half my intestines and a couple of days work of constipation (I wasn’t, it should be noted). This in itself was a little worrying, but we got past it, put the costume back in place and settled back into my stroke. 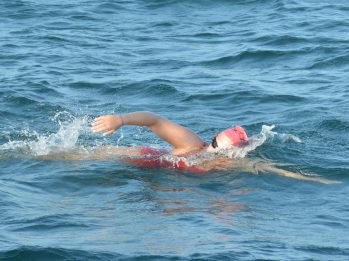 However, my stomach did not settle. My stomach got worse, and worse, and unhappier, and unhapppier. I started throwing my feeds straight up, unable to keep anything down no matter how low volume my crew made them. I started having diarrhea, stopping 5 more times in the following hours. I was absolutely miserable, exhausted, sick, wrung out, having stomach cramps and starting to feel weaker and weaker as hour after hour went by of not being able to keep my nutrition down.

I spent hours trying to talk myself out of quitting. All I could think about was touching the boat, and putting myself out of my misery. I had already done G2F this year, and that was a longer swim, so I didn’t even really feel a need to prove anything to myself. I had achieved my big goal for the year, the English Channel was just an added bonus. And in those hours between 3.5 and 9, it was an ‘added bonus’ that I simply did not want to continue doing. I thought that I was hiding this from my crew, but talking to them afterward they could all see the debate in my head.

My mum had been trying to get more anti-sickness tablets inside me by dissolving them into my feed, but one by one they each came straight back up again. At hour 9, she bought out the big guns- anti-emetics left over from my late father’s chemotherapy nausea. She dissolved this into my feed, and told me exactly what it was as she threw me the bottle,

The hat says “dangerous when wet”- a DCT classic 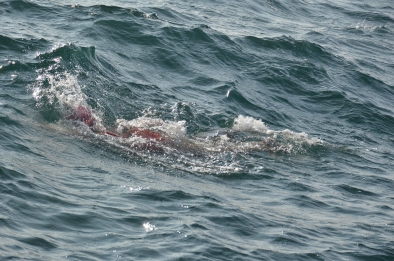 Our observer on board timed all of our feeds, and this little pep talk turned this feed into our longest of the entire swim- 1 min 5 seconds rather than my average of 20 seconds. But I drank it slowly, and I forced myself to keep it down. I stopped and started and stopped and started again, probably over the course of a good 2-3 mins more, just fighting the desperate need to purge my stomach.

But for the first time in hours, I managed to keep it down. 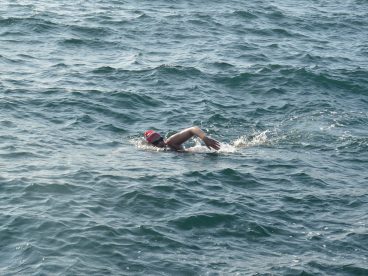 I started having to breathe only to my left, to try and not get battered by the waves and the chop. Fairly quickly, Pilot Jason noticed how much I was struggling and moved me to the port side of the boat. Not my favourite side to swim by any stretch, but at least I had a little bit of shelter from the wind!

From then, it was just a matter of time and strokes to take me into France. The pilots wanted to aim me at a set of steps on Wissant sea-front, where they could already see a crowd starting to form. They tried to explain to me where they wanted me to go, but I didn’t want to stop long enough to let them explain properly. Will decided to hop in as a support swimmer to guide me in, which lead to possibly my favourite quote of the observers report;

“18:33: Will is getting ready to escort/support Amy into the beach. He is putting on his WETSUIT.”

There was indeed a little crowd at the Wissant steps- Katia Vastiau and her mother among them. Katia explained to the rest of the crowd what on earth was going on, and took a whole host of photos of me and Will finishing, which I will treasure forever.

Words can’t describe how relieved I am. Happy, yes. Proud of myself, yes. Elated, yes. But most of all I am just relieved that I made it.

It was- mentally- the hardest swim I have ever done. My nutrition strategy went wrong from the start (nothing to do with my wonderful crew) and I spent the entire remainder of the swim trying to come back from that.

Thank you so much to everyone who sent supportive messages, comments, well wishes, and a HUGE HUGE thank you to everyone who donated to Bowel Cancer UK. At the time of writing, you have all helped me to raise nearly £2600!!!! I know my Dad would be incredibly proud of my swim, and proud of how much we have been able to raise. I am grateful to every single one of you who donated. On behalf of the charity, from my family, from myself, from my dad; thank you. 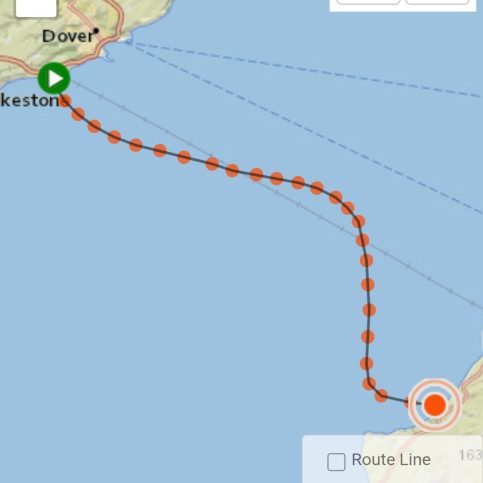